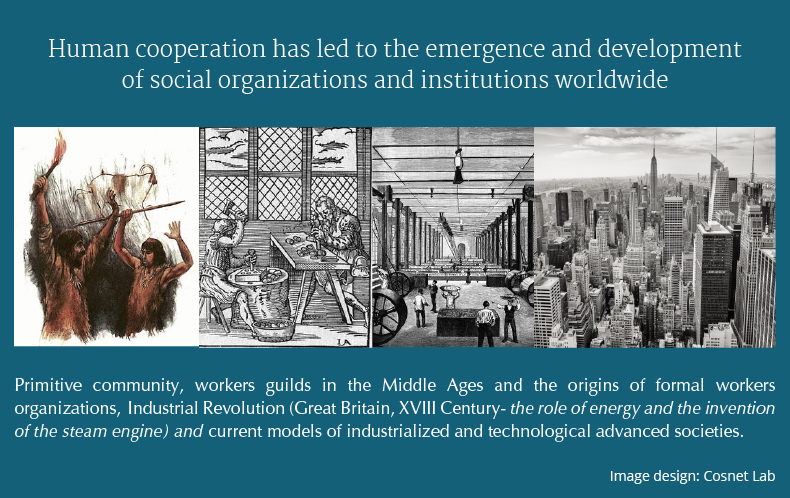 Over the years, the scientific community has devoted much time and effort to the study of cooperation among humans. Even today, it remains an important subject of study spanning many disciplines and still leads to heated and controversial debates among researchers of various scientific fields such as: economists, biologists, mathematicians, physicists, ecologists, sociologists, etc. When the different known mechanisms that govern animal behavior are naively extrapolated to the arena of social relations among humans, it becomes evident that it is extremely difficult to understand and explain the observed interaction patterns and the rules that govern human behavior. As we have already argued in other sections as well, cooperation is ubiquitous in nature and it can be seen at all levels of biological organization from molecules to populations. The implementation, development and maintenance of more effective and lasting structures of human and societal organizations have also been possible thanks to cooperation. Cooperation also contributed to the survival and evolutionary success of man as a species. In this regard:

However, despite all these facts and our accumulated knowledge about evolution and cooperation, we are far from understanding what are the mechanisms behind human cooperation. Solving this puzzle will allow us to design better ways to work and live together and also to optimize our chances of surviving as long as possible as a species. This is precisely at the root of our work, i.e., to understand what are the rules that lead to human cooperation. At variance with other lines of thinking, we believe that the only way to achieve this is by doing what science did since the beginning: observe the system under study (or do some experimentation) and then test the theory. If they don’t match, then, one should revise the theoretical assumptions and start again if needed.