Evolution and Darwin’s Theory of Evolution by Natural Selection

Two stories with a common vision 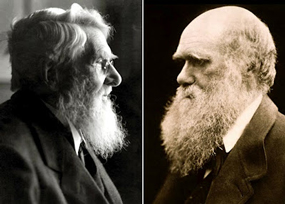 On 1 July 1858, the Theory of evolution of species by natural selection conceived by Charles Darwin (1809-1882) and Alfred Russel Wallace (1823-1913) was read to the audience at the Linnean Society of London. With the birth of this theory, these two men laid the foundations of Modern Biology and established a new way to understand evolution. However, it would have to spend much time until their ideas were finally accepted as an unquestionable fact. For several years, Darwin was a member, as a naturalist, of a scientific and geographical voyage (1831-1836) through South America and around the World on board of the British naval vessel H.M.S. Beagle. When Darwin arrived to Galapagos Islands located in the Pacific Ocean in 1835, he became fascinated with the local fauna and, particularly, with the amazing giant tortoises to which he devoted some of his writings. It was, precisely, in these Islands where Darwin had the opportunity to observe the already famous finches. These birds were different from one island to another and their beaks had slight variations in the size and shape depending on the food sources (seeds, insects) available on the islands they have colonized. The finches had to adapt to different environments (ecological niches) and over many generations those with most favorable traits were able to survive longer in their respective environments and have more offspring. Alfred Russel Wallace was a recognized and exceptional English naturalist, explorer, geographer, social critic, etc., who traveled through different regions of the world (mainly Amazon river and Malay archipelago- a group of islands between Southeast Asia and Australia-) trying to collect specimens of flora and fauna and relevant information on aboriginal population. Thanks to his thorough work and the numerous expeditions in which he was involved, especially throughout Indonesia, he could collect an astounding amount of specimens of great value to science. Wallace was also an expert on the geographical distribution of animal species and he is known as the father of Biogeography. After some years of observations, analysis and findings, Wallace wrote an essay in 1858 in which he proposed that the mechanics of an evolutionary divergence of species was similar to that due to environmental pressures. Both Wallace and Darwin were inspired on the social economic theory of Thomas Malthus and, particularly, in a work written by Malthus in 1803 entitled: “Essay on the Principle of Population”. They applied to the natural world (plants and animals), the fundamental dynamics of the controversy related to the growth of human population and the insufficient amount of available resources to support it. Wallace did not use the term natural selection as such, but, certainly, his findings were based on the role of natural selection as the driving mechanism in the evolution of species. This essay: “On the tendency of varieties to depart indefinitely from the original type” was sent to Darwin, who had been collecting evidences and tenaciously working on the same idea for almost 20 years. The purpose of Wallace was that Darwin reviewed the manuscript and eventually helped him to publish it. Despite they had worked in a parallel and independent way, the ideas of both naturalists remarkably coincided. In fact, Wallace’s manuscript was very similar to a Darwin’s essay written some years before that had never been published. But the main concern was that Darwin’s theory had not yet seen the light, because during many years, he had exclusively devoted to collecting reliable and convincing evidences that would proof his theory. Once Darwin had spoken with Charles Lyell (geologist, lawyer and friend of Darwin), he and the botanist Joseph Dalton Hooker decided to arrange everything to make public the Darwin’s main conclusions on the subject through an extract from an unpublished Darwin’s 1844 Essay consisting of a portion of a chapter and a personal letter sent in September 1857 to the American botanist Asa Gray. In that letter, Darwin had already outlined his basic ideas on natural selection. These two Darwin’s contributions and Wallace’s manuscript were read out together for the first time at the Linnean Society of London on July 1858. Both works were presented under the title: «On the Tendency of Species to form Varieties; and on the Perpetuation of Varieties and Species by Natural Means of Selection”. However, that day, neither Wallace nor Darwin could attend the event. Wallace could not be consulted in advance (he was still in Malay archipelago) and Darwin was in mourning for the death of his son. Although Darwin’s work on evolutionary theory was more comprehensive and detailed, the similar vision of Wallace contributed to crystallize and support the foundations of the emergent theory of natural selection. It is worth mentioning that these two men kept a good relationship for life. 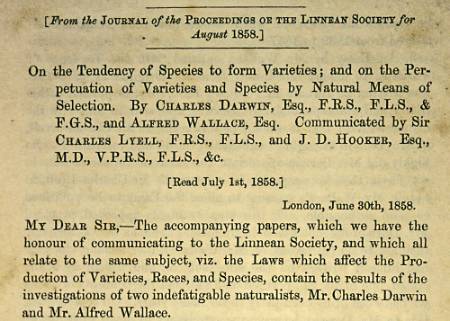 The theory of evolution by natural selection had been presented to the world. From that moment, and despite of unbelief and skepticism that accompanied this theory for several years, nothing would ever be the same. One of the most scientific influential and best-selling books of all times: “On the Origin of Species by Means of Natural Selection, or the Preservation of Favored Races in the Struggle for Life”, written by Charles Darwin was published on November 24, 1859. Linnean Society of London: http://www.linnean.org/

This is an instructive interacting tour through the Galapagos Islands developed by NOVA, in which you can explore the different islands of the Ecuadorian archipelago, see amazing landscapes, know the native fauna of the region and learn more about Darwin’s experiences and findings. It is a different way to follow the footsteps of the great English naturalist Charles Darwin. 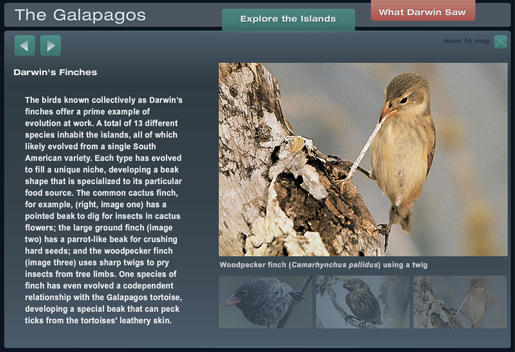 Darwin’s Theory of Evolution by Natural Selection: Main Lamarck’s statements on Evolution: Giraffe case: acquired traits vs. reproductive success A- Lamarck’s perspective: Giraffes needed to reach the highest branches and leaves of trees and this besoin made ​​that their necks were increasingly elongated (extended use of this part of their bodies) to better adapt to their environment. As a result, their necks were gradually becoming longer and longer and this physiological change was passed on to their offspring. Thus, this hypertrophy (excessive growth of tissue or an organ) will be inherited by next generations. B- According to Darwin’s theory of evolution by natural selection, the explanation to this example will be the following: In first place, we consider the existence of a population of giraffes with variable neck sizes (individual variations) in which those individuals with longer necks can reach the highest branches and leaves on top of trees obtaining, in such a way, more food and energy. As a result, these individuals are able to live longer, have more reproductive success than the others and thus, pass on this trait to their offspring. Gradually, and over several generations, this beneficial trait will become more prevalent in the population until all individuals had finally long necks (in other words, trait becomes fixed). 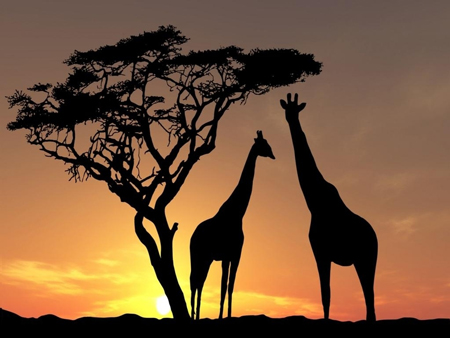 The evolution of a pathogen: Mycobacterium tuberculosis

The TB case: TB is one of the oldest and deadliest diseases in the world. In 2012, an estimated 8.6 million people developed TB and 1.3 million died from the disease, including 320.000 deaths among HIV-positive people (Global Health Observatory-WHO). This disease has accompanied man since ancient times and is caused by a Gram-positive bacterium, specifically, an acid-fast bacillus known as Mycobacterium tuberculosis. This bacterium was isolated and identified in 1882 by the German Physician and Nobel Prize winner Robert Koch. One of the biggest concerns today is related to the increased number of cases of infected people worldwide by multi-drug resistant tuberculosis (MDR-TB), including some countries of Western and Eastern Europe. According to WHO estimates, more than 500.000 new cases of MDR-TB arise each year around the world and this rate continues to rise. 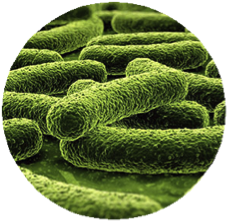 On the first contact with Mycobacterium tuberculosis, the immune system of most individuals generally controls or clears the infection through a complex network of interactions. This mainly depends on the effectiveness or susceptibility of the host defense mechanisms. Eventually, individuals can experience only a mild form of the active disease (primary TB). However, throughout many years of evolution, this pathogen has developed some effective survival strategies or mechanisms like inhibition of phagosome-lysosome fusion, inhibition of phagosome acidification, etc., to evade the macrophage responses and therefore remains inactive for long periods of time (latency). All of this suggests the existence of an equilibrium between the host immune system and the pathogen that is established and maintained by a wide network of interactions and biological scales. However, if for some reason the immune response fails and is unable to control the infection, as well as in the presence of certain favorable conditions of pH, temperature, oxygen pressure, etc, the infection can be reactivated (reactivation) causing an active disease again. Recent studies suggest that specific pathogenicity and persistence of Mycobacterium tuberculosis can be explained via a combination of different genetic mechanisms such as loss of function of certain genes or the acquisition of new ones via horizontal transfer. “Genomic analysis of smooth tubercle bacilli provides insights into ancestry and pathoadaptation of Mycobacterium tuberculosis”, Nature Genetics 45, 172–179 (2013). The latency of Mtb bacterium is a biological condition in which although the pathogen is not completely eradicated, there are no clinical symptoms of the illness in the host. People with latent TB infection do not exhibit any sign of the disease, since the tubercle bacilli are not active in the body (they remain in a non-replicating state). This ability of bateria is part of their evolutionary strategy. In its origins, Mtb bacterium was less virulent because human populations were significantly smaller and the pathogen needed a host or reservoir to ensure its survival and reproductive success. As the population density was increased and humans began to live in larger groups or communities, the bacterium became more aggressive or pathogenic. Obviously, human interactions favor efficient pathogen transmission from one person to another. After having concluded the most complete work to date on the sequencing of MTB genome (I. Comas et al. Nature Genetics, DOI: 10.1038/ng.2744) and analyzed numerous samples from infected patients distributed in different geographical areas of the planet (in total, 259 samples of TB bacteria), it is absolutely clear that the history of this bacterium is linked to the history of mankind. The team in charge of the research determined that the association between TB and humans is dated to about 70,000 years before humans left Africa. After so many, many years, the fight against the pathogen goes on. You can also read: – J. Sanz, J. Navarro, A. Arbues, C. Martin, P. C. Marijuan, and Y. Moreno, “The Transcriptional Regulatory Network of Mycobacterium Tuberculosis”, PLoS ONE 6(7): e22178 (2011). PDF Version. – José A, Cuesta, Mathematics of Evolution,  Newsletter of the EMS 76, 28-37 (2010).