According to the Theory of evolution by natural selection proposed by Charles Darwin, the expectancy is that animals behave in such a way that their natural tendency would be to increase their own chances of survival and reproduction (fitness) and not those of others. This implies that altruistic behaviors in nature should be removed from the population as they hamper, in principle, survival and reproduction of individuals. Then, the main questions in this context are: Why would some individuals help others paying a cost for this? Why would they sacrifice for the greater good if this behavior does not provide them any benefit in return? Darwin recognized in his book «The Origin of Species” published in 1859, the difficulty to explain this evolutionary puzzle. The existence of some altruistic and cooperative behaviors in social insects like honey bees, the phenomenon of sterile castes formed by non-reproductive individuals that leave no offspring and the suicidal role of these insects in defending the hive, were traits that natural selection could not favor. For Charles Darwin, this particular problem related to altruism and cooperation represented one of the major difficulties to which his evolutionary theory had to face. After several observations of different species that seemed to contradict the selfish selection formulation of the mechanism of natural selection (In the perpetual struggle for survival and reproduction, individuals must be deeply selfish as they had to compete among them for the space and limited resources), Darwin assumed that selection acting on groups of individuals operating as a unique entity or family could be the answer to this big question. The first successful answer to this problem of altruism took many years to come with the help of J.B.S. Haldane, a prominent Scottish biologist. Haldane made relevant contributions toward a theoretical reconciliation between the Darwinian evolution and the Mendelian genetics. On the other hand, he emphasized in his works the prominent role of natural selection in nature and he was one of the pioneers in studying the evolution of altruism from a mathematical perspective. In this sense, he conceived the idea of inclusive fitness; a revolutionary concept that some years later would crystallize and be mathematically formalized (quantitative formulation) providing, in such a way, a different and well-founded approach to solve the enigma of altruism. According to Haldane the altruistic behavior of an individual in favor of its relatives can also increase its genetic fitness via the relatives’ offspring. When Haldane was asked in a pub whether he would risk his life to save a brother who was drowning, he metaphorically replied: «No, but I would do for two brothers or eight cousins». In answering so, Haldane, one of the founders, along with Ronald A. Fisher and Sewall Wright of the mathematical theory of population genetics was thinking in the preservation of his genes (given that on average, a brother shares with another half of their genes and a cousin just one-eighth). This concept of inclusive fitness was mathematically formalized in 1964 by the evolutionary biologist William D. Hamilton (1936-2000). Hamilton developed a theory (Kin selection) based on inclusive fitness that explained from a quantitative and detailed viewpoint how altruistic behavior could evolve in certain conditions (see Hamilton’s rule). Fitness is a central concept in evolutionary biology and is referred to the gene contribution of an individual to the next generation. An individual can increase its fitness either through its own reproduction (direct fitness) or assisting the reproduction of genetically related individuals (indirect fitness). Inclusive fitness is the sum or aggregation of both, direct and indirect fitness.

This emergent theory (Kin selection) had to face up with the already established theory of group selection that was widely accepted at that time as the most suitable explanation to this tangled phenomenon. Kin selection is the evolutionary strategy according to which an individual engages in self-sacrificial behavior that benefits the genetic fitness of his relatives. Although Hamilton mathematically formalized this concept in 1964, it was Maynard Smith who coined the term “Kin Selection” for the first time that year. Kin selection is a form or extension of natural selection that favors altruistic behavior toward close relatives (kin) resulting in an increase in the altruistic individual’s genetic contribution to the next generation. The concept is referred to those genes that tend to promote or underlie an altruistic behavior. This implies that the proportion of non-altruistic genes that relatives can share do not count at all in this scenario. If we consider the fact that an individual is more genetically related to some relatives than others, the logic behind this statement is that the altruistic behavior of this individual will contribute to increase the fitness of those blood relatives who are more likely to carry copies of his own genes for altruism. In such a way, the chances that these “altruistic” genes are propagated and passed on to offspring will be higher. Once a gene underlying altruism emerges, natural selection acts and does its job.

Hamilton’s Rule is a formal representation of the logic whereby a gene which favors altruism may spread or increase in frequency in a population. It is used to estimate whether «selfless” type alleles will spread within a population. For this to happen, there must be some degree of relatedness, because otherwise r=0 and consequently rB will never be greater than C (see equation below). The coefficient of genetic relatedness represents the probability that the recipient will share a given gene with the donor by descent from a common ancestor. The higher the value of r is, the greater the probability that the recipient of the altruistic act will carry the gene for altruism.

Hamilton’s equation specifies the conditions under which altruism is favored:

Where the variables represent the following:

In evolutionary biology, altruism is defined as any behavior that benefits the recipient at a cost to the actor (costs and benefits are always measured in terms of reproductive fitness). According to Hamilton’s rule, altruism can be favored or evolve if the indirect benefits of helping relatives outweigh the direct cost for the donor for any losses in its own reproduction, i.e. when the inclusive fitness is higher than the eventual loss of individual fitness. When the benefit back to the actor (rB), is greater than the direct cost suffered by the donor C for performing the altruistic act, then the number of copies of altruistic genes may increase in frequency in the following generation and the altruism can be favored by natural selection.

Kin selection is believed to be the mechanism behind the evolution of eusociality. William Hamilton explained eusociality in social Hymenoptera by kin selection and based on the haplodiploid´s genetic sex-determination system. Hymenoptera is one of the largest orders of insects, but most hymenoptera are not eusocial. 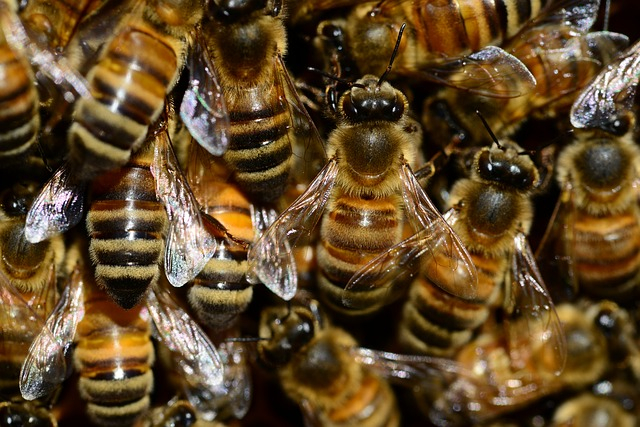 Image: Bees- honey bees- Order Hymenoptera. Hymenoptera is an extensive and highly developed order of insects, including bees, wasps, ants, and sawflies, etc. having two pairs of membranous wings (the fore wings are larger than the hind wings) and often living in social colonies. The insects of this order are developed in complete metamorphosis.
What are the main features that defined eusocial organisms?
Haplodiploidy is postulated as having paved the way for the evolution of eusociality in the Hymenoptera, although this is still a matter of controversy among scientists. This is a sex determination system in which males (drones) are haploid and females are diploid. Males develop from unfertilized eggs (they have no father) and have only one copy of each chromosome, while females are developed from fertilized eggs and have two sets of chromosomes. This form of sex determination conducts to an asymmetry and to a different kin relatedness to that seen in diploid species (whereas a diploid female is related to her sister only 1/2, a haplodiploid female is related in a higher proportion i.e. 3/4). As a result, a queen’s daughter is more closely related to any of her sisters than she would be to her own daughters. This is the reason why females prefer to help their mothers raise their sisters (indirect fitness) instead of having and raising their own offspring (direct fitness). Helping those relatives with whom you share a high proportion of genes can increase or maximize your inclusive fitness. The coefficient of relatedness in haplodiploid sex determination system: 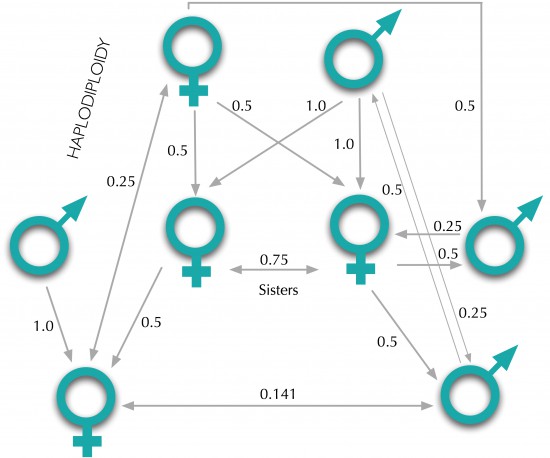 Hamilton´s Theory by B. Brembs, 2001. Image slightly modified by Cosnet.